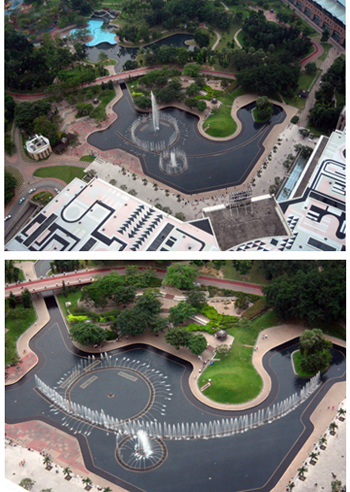 Swift Energy was invited by the maintenance contractor for the water features in a prominent shopping and office complex landmark within Kuala Lumpur to upgrade the existing control system for the fountains.

The fountain would also be programmed with multiple patterns and set to operate at preset times with adjustable intervals.

The PLC system was programmed to control devices such as the pumps, Choreoswiches™, Waterswitches™ and lighting contactors.

Patterns with exotic names such as the Traveling Wave, Jumping Burst, Popcorn, Stepping, Roman Candles, Rocking, Chasing and Jumping were configured into the PLC logic.

The Touch-screen was configured with functions that conveniently allowed the operator to set the times of operation for the fountain, change interval settings of the patterns and manual bypass mode.

The newly commissioned ACC operating philosophy was significantly different because it utilized a standard off-the-shelf PLC system to perform the controls and it was pre-tested to verify the ability of the output modules to switch at 10 cycles per second.

The new system does not require any proprietary hardware or software.

The touch-screen replaces a hardware rotary selector and gives much higher flexibility in configuration of soft pushbuttons, indicators and digital displays.

The automatic operations of the fountain control system have been revived with the latest generation of electrical logic control equipment supported by a local engineering solution provider thereby making repairs and software changes more easily accessible.